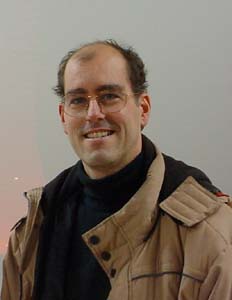 Astronomer Dr. Peter Jenniskens [Portrait (3.2 Mbyte)] is a Research Scientist with the Carl Sagan Center at the SETI Institute and works on mission projects at NASA/Ames Research Center in Moffett Field, California, and on research topics that relate to interstellar and interplanetary matter.

Research Interests:
Meteor showers - Jenniskens is an expert on meteor showers, and is known for identifying the parent body of the Quadrantid shower: a minor planet called 2003 EH1. Main belt asteroid 1999 TY224 was named (42981) "Jenniskens".

Artificial meteors - Jenniskens has applied meteor shower observing techniques to study the reentry of various spacecraft. Ice - His work at the Space Science Electron Microscopy Lab has led to the discovery that unusual forms of water ice play an important role in astrophysics.
DIBs - His astronomical observations of Diffuse Interstellar Bands in the visual and near-infrared absorption spectra of interstellar matter, in collaboration with F.-X. Desert, provided the first overall view of the Diffuse Interstellar Band spectrum. 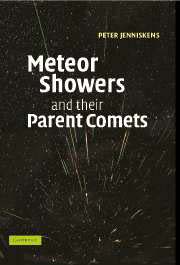 Publications:
List of Publications. He is author of the book Meteor Showers and their Parent Comets, a comprehensive (790 page) and richly illustrated overview of the field of meteor astronomy for both amateur and professional astronomers, published by Cambridge University Press in 2006. A paperback re-print was issued in 2008.

From the hardback review: '... I expected this to be the long-awaited standard text on the subject. As it turned out, I was not disappointed. ... It is, above all, a good read.' The Observatory

Associations:
Peter Jenniskens is chair of the Task Group on Meteor Shower Nomenclature of the International Astronomical Union's (Commission 22), former chair of the professional-amateur cooperation working group (1997-2006), and a former secretary of IAU Commission 15. He is member of the American Astronomical Society (Division of Planetary Science). He has organized special sessions for meetings of COSPAR, the AGU, and the EGS, and was (co-) editor of special issues of the journals Meteoritics and Planetary Science, Advances in Space Research, and Earth Moon and Planets.

Peter Jenniskens is the Principal Investigator of the Stardust Sample Return Capsule Reentry Observing Campaign (Hyperseed MAC), including a similar mission to study the return of the GENESIS sample return capsule. Results include:

This work has lead to the following discoveries:

This work has lead to the following discoveries:

Results from the 1999 campaign were published in "Leonid Storm Research", edited by P. Jenniskens, F. Rietmeijer, N. Brosch and M. Fonda, a 606 page reprint of Vol. 82-83 of Earth, Moon and Planets (Kluwer Acad. Publ.). Results from other campaigns were published in special issues of Meteoritics and Planetary Science (1998 Leonid MAC), ISAS Special Publication (2001), Astrobiology (2001), and Advances in Space Research (2002). 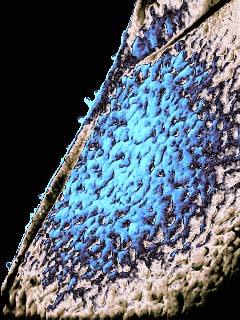 In 1993, Peter Jenniskens was awarded a National Research Council Associateship Award to work with Dr. David F. Blake at NASA/Ames Research Center on the study of the micro-structural and micro-chemical properties of ices and astrophysical implications. This included the study of how structural changes in water ice can drive outgassing phenomena of comets and affect the chemistry in UV photolysed interstellar ices. This work led to an article (+ cover) in the August 1994 issue of Science. In subsequent work, the following results were obtained:

Since February 1995, he has continued these studies in association with the SETI Institute in support of instrument development at NASA/Ames. The SETI Institute is a non-profit research organization that conducts and promotes research in astronomy and planetary sciences.

Peter Jenniskens received his PhD from the University of Leiden, the Netherlands, in 1992, based on his thesis entitled "Organic Matter in Interstellar Extinction". His thesis advisors were Prof. H.J. Habing and Prof. J.M. Greenberg, and his mentor was Dr. M.S. de Groot. This work involved:

In recent years, the observational work on DIBs has been aimed at finding constraints on the DIB carrier.